I am staying at home this year, and do the music from here. My studio "Klangfabrikken" is ready. Instruments are up and going. This year I think I wan`t to do some more singing.... Not that this is my favourite thing to do, but fun somehow. Trying to do some more pop-rockish songs this year. As always I fancy the collabs that happens. So I hope there will be some this year too.

FAWM is a community on internett. I have been participating on this, every february since 2013. 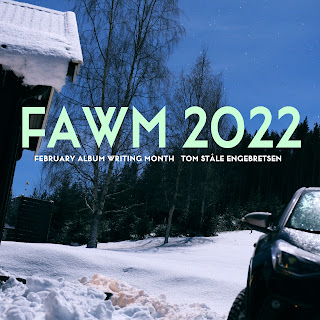 Some Snap Shots from Oslo

Happy new year to everyone! 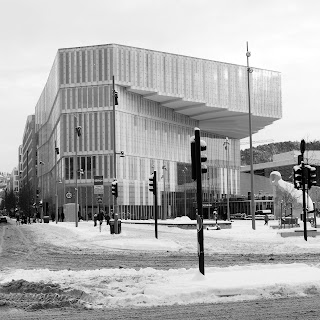 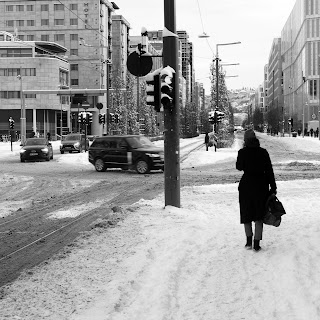 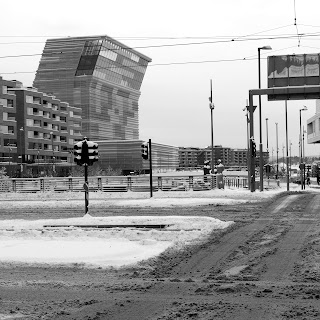 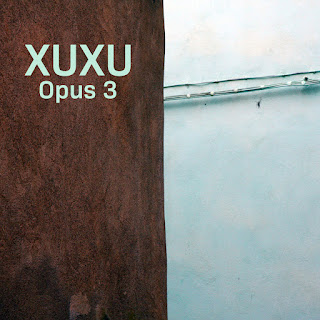 Listen to the album here!

Starting with "A Day In Eternity" you find some delicate sounds and laidback drone ambient. Almost with an early Pink Floyd feeling.
The journey on Opus 3 gives a lot of highlights. Introducing the genre "Slothcore" Invented on Fawm 2021 (February album writing month. Web community) Slothcore is music between 20-40 BPM. Described as a lesson you listen to, but are too tired to hear. And suddenly, when you almost fall asleep.... You wake up.
"Anomaly Republic" and "So Tired" are Xuxu contribution in this genre.

The epic story about family "Jensen" is actually made on a steel wire on a Webster Chicaco. This was probably recorded in early 60`s or maybe earlier. The voices you hear are the parents of a good friend of mine; Tore Hauk Jensen. A huge thx for this stunning recordings that he has taken good care of. I have put it in the context of art music.

This is an album with a deep dark mood. But also melodic and dramatic at times. An epic journey to strange and dark music. Xuxu are developing a own kind of magic and sounds. Opus 3 is ear candy.

The moniker WARPNESS had come to an end.

From the beginning this name was a tribute to ancient relatives I remembered as child. My great grand mother name was Charlotte Varpness. I have good memories of her two sisters: Ingrid and Ellen Varpness. They were really a part of my childhood. William, Lolle and Marie emigrated to America.

Varpneset is a place just outside Namsos in Norway. This was the place you went with the ferry to the island Otterøya. In 1977 the bridge “Lokkaren” was opened and the ferry was not needed anymore. Varpneset become a sort of hidden pearl. (Warpness was the old name, before changing with the “V” letter.)

Memories are fading away. So does the history. But I do remember that we do pottery from the clay at the beach. I also remember the old white house where there was a kiosk managed by my ancient family.

“Aunt” Ingrid and Ellen was really 2 very different persons. Ingrid was the gentle and kind person. Ellen was the angry sister, and sure had her own opinion about everything. But kind in her own way. I loved them both!

Charlotte I can not remember, but I use to call her “Olde” as a very little child, before she died. Charlotte is mother of my grand dad Ståle Øistein Davidsen, who died when I was only 15. That was a sad loss I still think a lot of.

Because of my relatives I called myself Warpness to keep they`re name alive.

Musically it became a diversity.

At one side it was ambient and quiet music. Album such as “One Note”, “Atmosphere” and “The Wind”. These are sort of aunt Ingrid. But I doubt she would understand this kind of music.

At the other end Warpness became experimental, dark ambient and noise.

“The Labyrinth” is an EP that came to life during the invitation from Unexplained Sounds Group; Raffaele Pezzella.

“Mørkerom” is a personal favorite. I had to challenge myself a lot for this album. Be a better musician. Be better on technical stuff. Mix. Mastering.

The album was made in Flatdal, Telemark, late autumn 2017. It became very dark. But I learned a lot during this process. Maybe this was aunt Ellen after all. I still see this as an important album in my career. 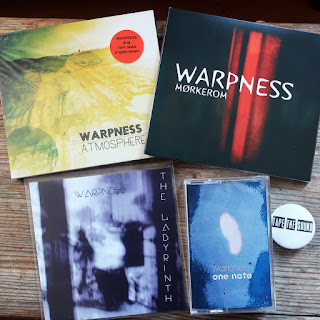 But it all come to an end. Warpness moniker still is a tribute to my relatives on my mothers side. I know that music was a great interest in my ancient family. The times are changing and a synth was not and instrument back in those days.

My problem is that Warpness is not me.

I must admit that I hide myself behind this moniker in fact that I was not a good musician yet. Maybe I still not am, but I think it is time to stand up for myself now. Even my years have changed a lot, digging into making music. I better take the next level on my musical journey.

From album Opus 3. Release: 22.7.21
This amazing rock you find in Mølen, Nevlunghavn, Norway.
As always on my Opus serie: One long shot!
Posted by Tom Ståle Engebretsen at Sunday, June 27, 2021

Finally. I always wanted CD`s on my XUXU project. The Opus serie is a continuing process, and I think the CD is a must have. Even if the release was last year on this album, I actually don`t mind making this now. Produced in UK. www.bandcds.co.uk This is a very limited production. And I also can tell that OPUS 3 is just around the corner...

If you wan`t a CD you can order HERE. They are awesome and the first one`s to order also get a free Guitar Picks. 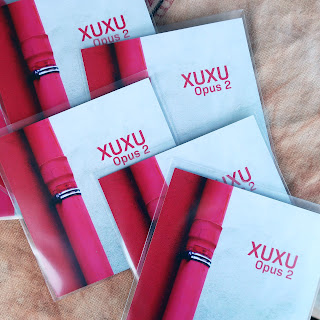 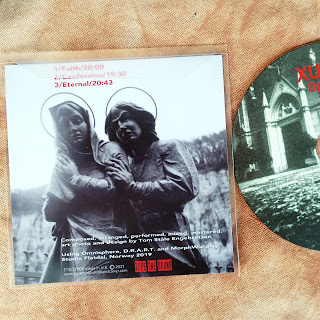 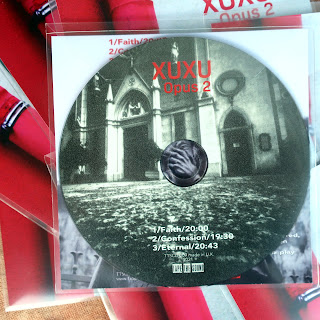 Story behind the pictures:

Cover picture are from Sardinia , Italy. The first 8 releases with Xuxu will be from here. A collection of my photos with this colorful images. Number 2 now.

There are amazing statues on the path that lead to "Santuario della corona della madonna." On side 2 there is a picture from the religious sculpture you find here. (There are many amazing sculptures here! Just saying) And the CD picture is from the monastery there. This is in Northern Italy note far away from Lake Garda.  This is really a weird and beautiful place.

First time I actually participate on World Pinhole Day that was 25. april this year. I was at my cottage that day in Rendalen, so it felt good to take the picture of my landmark there: The Bicycle. It take some time to prepare everything. Developing the paper film. Scan. Retouch and all that. But finally the picture is here. Uploaded on www.pinholeday.org 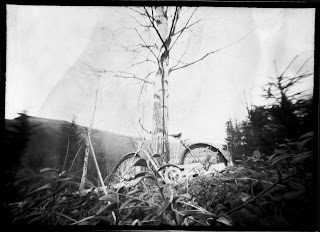 And the equipment used: 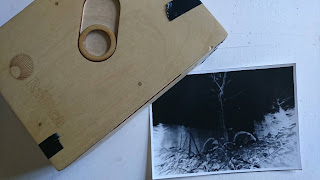 Link to my picture on Pinhole site.

It has been an amazing FAWM this year. February Album Writing Month. All the songs this year.... But sorry to say, due to FAWM site restoration these links will not work anymore. But the list is a compilation of all my work this year. They are a lot.

Was is different this year?

I think some collabs were about to go somewhere this time.  @grenzgaengerin aka Barbara could be something in the future. I think her flute play, and the taste for the same melodies like me, could be interesting. This is the songs with quietness, melodic, romantic and epic feeling into it. Sure we have to make at least an EP together. Will see what the year will bring, but I think this could be something.

Otherwise it is always nice to have contact with my FAWM friends. February each year is really social actually, because of this. But thing goes fast. Composing, comments, and friendly updates. Yeah. What`s not to like? Fawm has become one of my favorite things each year. 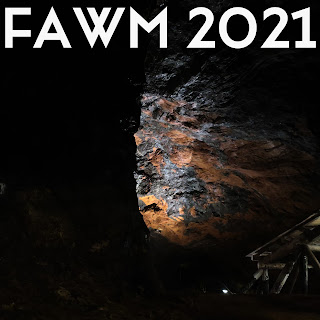 Ok. I will work a lot on post production this year. Many of the new songs fit into many projects that I am on. A new style named "slothcore" was an new genre this year invented by FAWM composers. Slow beat at
20-40 bpm. Explained as something you listen too, and nearly fall asleep, and the suddenly awaken...
So I made actually 3 songs in this style. One to be released on a FAWM compilation later. And I also use this song in my forthcoming album Xuxu: Opus 3. Actually 2 songs participating on my Xuxu album with "Slothcore"  Keep the music coming and take care.
Posted by Tom Ståle Engebretsen at Wednesday, April 14, 2021

My best photo book ever!

Ny naivisme - Boken til salgs her!

Do it with Tom Ståle